The death of Bob Hoskins leaves a gaping hole in cinema. He was such a wonderful actor, going from comedy to drama in moments, touching on matters of basic humanity in a way rarely seen. I have a huge list of movies that he gave his magic to, but this is the Asian Cinema Cafe, and so the movie that comes first to mind is Unleashed with Jet Li. 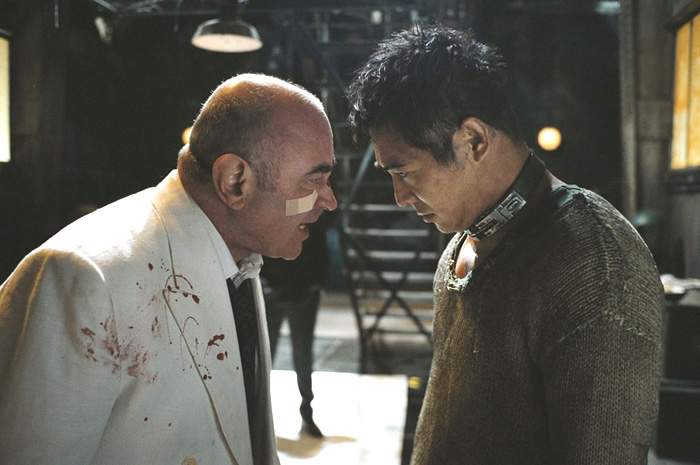 I don’t think there is an actor alive who wouldn’t have loved working with Bob Hoskins, but some of his co-stars you would just never have imagined him with – Hoskins was a British character actor, one of that extraordinary class of acting talent that just seems to be able to play any character. Li is the ultimate action star, his phyisicality and acting style seemingly leagues away, but stunning and compelling in its own right. How could these two come together in a movie that would allow both of them to shine and give them both meaningful characters?

What resulted, born out of the talents of these two brilliant stars, was a fable, set in Glasgow of all places, the story of a man raised from early childhood to be snarling dog, a creature chained by his collar, which, when it came off, was the signal to turn into terror unleashed. Jet Li was Danny the Dog, and Bob Hoskins was his vile ‘owner’, Bart. Kept in a cage, fed scraps and treated like a dog, Danny was almost subhuman. With lesser actors, the situation would have been farce, or worse, simply unbelieveable. But Li and Hoskins made you believe it.

Along comes Morgan Freeman as Sam, blind in sight only, and his stepdaughter Victoria, whose skill with a piano awakens memories in Danny and sets him on a journey of self discovery and, ultimately, redemption. Unleashed is filled with unforgettable moments – Danny taking flight under his bed when Sam brings him dinner, clutching the electronic piano Victoria has given him to his chest and learning to check a watermelon for ripeness when mayhem is happening all around him. One of Hoskins’ most unforgettable moments is finding the pair of pajamas that Sam gave Danny. Enraged, he fires shots into the pillow, scattering feathers everywhere, yelling “Pyjamas? F***ing pyjamas? You ungrateful little bastard!” He was no sweetheart in this movie, to be sure, but he was the right one to play Bart opposite Jet Li’s Danny.

Like most people, I do prefer the original title, Danny the Dog, but ultimately it doesn’t matter what it is called. This film is one of those rare times in cinema when a group of perfect actors in perfect roles come together and make a perfect film.

Goodbye, Bob Hoskins, we will miss all of the characters you were – Bart, Eddie Valiant, Smee, Lou Landsky (another bit of unexpected but inspired casting with Cher), Badger, Vivian van Damme and so many others. It is a legacy many actors would envy, and one your fans will treasure.