On February 3, 2011, I remember sitting up on the Internet all night when Cyclone Yasi struck North Queensland, desperately trying to keep track of friends living in its path. I simultaneously linked into blogs, webcams and Facebook, as the terror unfolded. One webcam showed Cairns as the winds were rising – the blogger talked about taking refuge in his bathroom when it became too dangerous to film anymore. I followed the ABC Live Blog, and watched live broadcasts from towns like Innisfail. Like the Japan tsunami disaster a month later. the power of the internet brought the scale of the horror home, wherever you were.

The image on the left is from NASA – it showed Yasi approaching Queensland, with the eye very clearly visible in the centre. It looked huge and threatening, and while we livws further down the coast, and were unlikely to be badly affected, it was clear that those in its path would find a drasticacally changed landscape after Yasi passed through.

My brave friend June Perkins, who lived with her husband David and their children at Mission Beach, where Yasi made landfall, kept her fearful circle of friends up to date on their plight. The Perkins family were hoping to remain in their home, but in the end were driven out by Yasi’s fury. By the time it made landfall, Yasi was category 5, ripping trees out of the earth, crushing houses, causing many injuries and tragically, one death.

The aftermath was traumatic, as people struggled to put their lives back together, their homes and their stability torn apart by that raging storm. It must have seemed as if no one would ever smile again. Through it all, June kept listening, talking, sharing and recording their impressions of the struggle back to normality. No one can really imagine, unless they have experienced it, what it is like to have everything ripped away in one terrible night. But June understood and knew what to listen for, and look for, in the voices and faces around her.

The result of that patient listening and record keeping is After Yasi, an extraordinary eBook that focuses on the struggle to find a reason to smile again, rather than the one night it took to tear it away. Rising from the wreckage were voices of hope, moments of joy; but most of all, the relief that comes with knowing that things can be lost and let go, but the survival of your family, friends and neighbours is beyond price.

The eBook is an interactive experience that links to blogs and sources that show how people coped with the cyclone and the aftermath. It’s a rich trail of material that celebrates the human spirit in all its facets – despair, pain, recovery, optimism and resilience.

Among the highlights for me are Christine Jenkins and the anchor she tied to her house; Mr Hardy and his chainsaw optimism; and the wonderful poem Cassowaries Can Fly.

As June said, Yasi brought out life’s poets – it brought out life’s warrior poets, fighting the crushing sadness and bewilderment that follows a disaster of this scale, and soldiering on, rebuilding, recreating and most of all, finding that lost smile within to share with others and bring them hope and joy.

“For me, recovery means normality, being productive and looking forward.” – Lydia Valeriano – Blog: Writers on the Storm. Just one of the many moving and memorable quiotes from the book.

After Yasi is a source of inspiration for all those recovering from trauma, an amazing effort by an amazing group of people. More than that, it is part of our history now, a testament to the resilience and courage of our firends and neighbours.

Don’t forget to leave a comment – the best will win a photographic print or a copy of the ebook! Do you have a memory of following the path of Yasi on the Internet that night, of fearing for friends and relatives in Far North Queensland or coping with the knowledge you and those you loved were in its path? Please share in the comments. 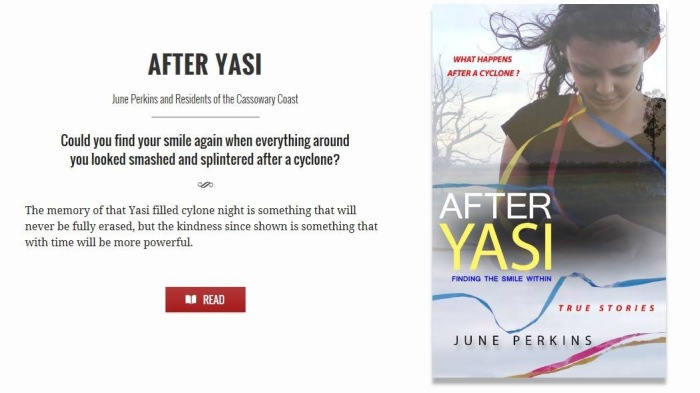 After yasi is for sale at blurb.com and at authors unlimited

The cover of this book haunted me for months. The woman looked just like Lana Turner, and so my first impression was that it was a novel about the Golden Years of Hollywood. I wasn’t really interested about that, but my eyes kept being drawn to it on the shelves. Finally I picked it up and had a closer look. It was actually about a Russian woman pilot in WWII. The blurb sounded way more intriguing than I suspected, and about the same time more evidence of missing woman pilot Amelia Earhart was being recovered. Anyway, that’s why you don’t judge a book by it’s cover.

Sapphire Skies opens with the recovery of a downed WWII Russian Yak-1 fighter plane. These were the planes flown by women pilots in the Soviet Air Force, flown so skillfully that the German flyers called them Night Witches, flying in deadly and swift in their little wooden planes to shoot down some of its best pilots. The recovered Yak-1 belongs to Natalya Azarova, an ace fighter pilot who was suspected to have defected to the Germans after her plane was show down and she disappeared. Her former lover, and commanding officer, Valentin Orlov, rushes to the site – he has waited for her, dead or alive, since the war.

Sapphire Skies is a beautifully written book that crosses time between the war and the present day, giving a detailed portrait of Stalin’s Russian and the Russia that Putin presided over in 2000. This is the Russia that young Australian woman Lily retreats to following the death of her fiance. Her story becomes entangled with that of Natalya as the mystery of the pilot’s death unravels. Alexandra knows her subject intimately – she is Australian, of Russian parents, and has written a prequel to Sapphire Skies called White Gardenia. She writes elegant prose with passion and conviction, and creates characters that linger with you long after the book is done. But what is even more enthralling is that Natalya, and her lover Orlov, really existed.

Lydia Litvyak was the inspiration and the wellspring for Alexandra’s novel. She was pretty and young (only 21 when she died) and a scourge of the skies. She shot down at least 12 planes by herself, the record for a female fighter pilot,  and when she was shot down, her body was never recovered. This led to all sorts of speculation, including that she was seen in a German concentration camp and may have escaped to Switzerland, where she married and had children. None of this has ever been proved – her mechanic Inna Pasportnikova never believed it and led a search for her plane that lasted 36 years and led to the recovery of her body. Satisfied that Lydia had been found, Gorbachev awarded her Hero of the Soviet Union.

Her commanding officer, Alexei Solomatin, for whom she often flew as wingman, was killed in front of his company and Lydia wrote to her mother of her devastation, having only realised after his death how much she loved him, although it had been obvious he loved her. She became increasingly more reckless and daring and shrugged off injuries she sustained.

Like Lydia, Natalya wears make up and perfume in the air, and is admired as much for her beauty as her flying skills. Both are rebellious and driven by their love of flying, but Natalya’s romance with her flying ace is more fulfilled, and it is he who survives and never gives up hope that she will return. (No spoilers here, you find out pretty much right away that Orlov survives Natalya).

What I love is when a book grabs you enough that you cannot put it down until it is finished, and then sends you off on a quest to know more. Tracking down Lydia is a given, because she was the inspiration for Natalya, but I also found another forgotten chapter of women’s aviation history called Fly Girls, now unforunately out of stock at Amazon. This DVD details the 1000+ women who joined the USAF in WWII, as Women Airforce Service Pilots (WASPS) and logged up 60 million miles in the air test piloting planes and teaching male recruits to fly. None of them were permitted to engage in combat, but 38 died in service. A book – Women Heroes of WWII – is available at Amazon.

It’s a hidden aspect of women’s history well worth discovering, but start with Sapphire Skies, as I did. It’s a beautiful read and you will never forget the enchanting and brave Natalya.

Art began with the dawning of humanity. Survival and reproduction are the basic animal drives, but in humans, creativity makes a divine triptych.

Cave paintings were the earliest human response to the world itself, an innate human desire to understand and capture moments in time. They may have had a more esoteric purpose, such as praying for a successful hunt, but as a precursor of what we know as art, the motivation resonates with modern thought; to seize the moment, to hold it forever, to convey the truth of it.

For some, the definition of art is simple. It follows certain rules, it is recognizable as a representation of something else and it is performed or executed by recognized masters. But art has never really fit into these narrow confines, nor should it. Art is alive and organic, it grows and changes. The only thing that never changes in art is the desire to communicate an idea, an imperishable truth.

If you look at art this way, then understanding it, and what it encompasses, becomes easier. It must convey truth. There is a wonderful story, told by artist and animal behaviorist Desmond Morris about Congo, an ape he studied at London Zoo. He encouraged Congo to finger paint and the results were so striking that people flocked to see and purchase the paintings. At first the ape worked hard over his paintings, blending colors and creating amazing abstract patterns.

But Morris says he made the mistake of rewarding Congo with a banana when he produced a painting. Soon Congo was merely swiping the paper and holding out his hand for the reward. The truth of his art was lost in the desire to be rewarded for it.

Why do some artists and their paintings continue to move us through the centuries? Why does some music never fade into obscurity? Why do some books and plays never go out of print? Why, for example, does Shakespeare continue to draw audiences and give inspiration to young artists?

It is because these artists do not merely convey images of the world around them, they convey the truth of it. Truth does not always reveal itself completely. No one has ever solved the riddle of the Mona Lisa’s enigmatic smile, or even worked out who actually wrote the plays of Shakespeare. Was it an out of work actor from Stratford, or someone concealing himself behind the actor? It simply doesn’t matter. Once art is created, it exists of itself, regardless of the artist.

Great artists often speak of themselves as a channel, a conduit, through which art flows into the world. Beethoven was deaf, but he felt the vibrations of the music that he composed. Van Gogh was confined to a hospital after he cut off his ear, but he continued to paint everything around him. The truths these artists found in spite of their personal tragedies continue to uplift and inspire us today.

So don’t say, “I don’t know anything about art, but I know what I like,”; say, “I respond to art that has truth for me.”

Because that is what art encompasses – all of the truth.